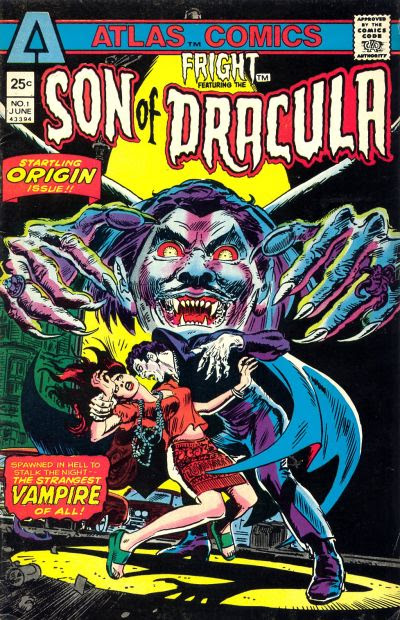 So, if you're not a comics geek, you're probably wondering what the heck "Atlas Comics" was. I'll try to be brief.

In the 1950s or so, Marvel Comics was actually calling themselves Atlas Comics (I think they were in the late 1940s, too, and Timely before that). Even back then, the company was owned by Martin Goodman.

In the 1970s, Martin Goodman decided the time was ripe to sell Marvel Comics off to another company, with the understanding that his son, Chip Goodman, would take over as publisher, or editorial director. However, the new owner (Cadence Industries) didn't do that. (There is some disagreement on this point, by the way). So, Goodman started up the Atlas imprint in 1974 (the publishing company was actually named Seaboard), and produced a whole line of comics that basically copied Marvel's style, as well as many of Marvel's characters!

Part of the way they did this was by hiring as many of Marvel's talent as possible... Larry Lieber, for example (Stan Lee's brother) was one of them. The line didn't survive for too long, far from the goal Goodman had of putting Marvel out of business!

If you want to read more about Atlas Comics, you can check out the Wikipedia entry or the The Atlas Archives website.
Posted by Jon K at 12:01 AM